A little brushing may be the secret to making better rechargeable lithium batteries.

The Rice University lab of chemist James Tour has introduced a technique to tune the surface of battery anodes by simply applying powders to them. The powder adheres to the anode and becomes a thin lithium coating which effectively prevents the formation of harmful dendrites.

Ground phosphorus-sulfur powder on the surface of metallic lithium foil has demonstrated that its surface energy can be tuned without the need for toxic solvents. Anodes modified in this way and associated with lithium-iron-phosphate-oxide cathodes in test cells showed that they retained 70% more capacity after 340 charge-discharge cycles than standard batteries.

The study appears in Advanced Materials.

“This would simplify the manufacture of high-capacity batteries while significantly improving them,” Tour said. “Grinding these powdered solids into a lithium metal anode dramatically reduces the formation of dendrites that can short out a battery, as well as accelerated material consumption.”

Weiyin Chen, lead author and graduate student at Rice, and his lab colleagues applied the elbow grease needed to test a variety of candidate powders on their electrodes. They first brushed the surface to give it texture, then powder brushed to create the thin film that reacts with the lithium metal and forms a strong passivation layer.

Tour said the powders effectively tune the surface energy of the electrodes, allowing for more uniform behavior across the material.

“The powder on the surface of lithium metal produces an artificial passivation layer that improves stability throughout charge-discharge cycles,” Chen said. “Using this method of brushing, the metal surface is stabilized so that it can be recharged safely.”

To show that the technique may have wider application, the lab also ground powder into a sodium electrode and found that the process greatly stabilized its voltage surge.

The co-authors of the article are Rice alumni John Li and Duy Luong; graduate students Jacob Beckham, Nghi La and Jianan Xu, and visiting scholar Victor Li. Tour is the TT and WF Chao Professor of Chemistry as well as a professor of Computer Science and Materials Science and Nano-Engineering at Rice. 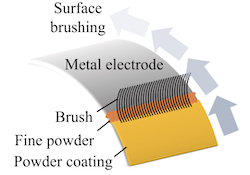 According to Rice University scientists, brushing metal powders on the surface of lithium anodes shows promise in reducing the threat of dendrites that damage recyclable batteries. (Credit: Tour Group/Rice University) 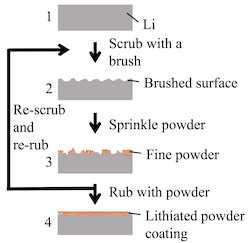 A multi-step process without toxic solvents that adds a lithium film to the anodes of lithium-ion batteries promises to prevent the formation of harmful dendrites, according to Rice University scientists. (Credit: Tour Group/Rice University) 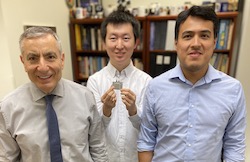