On September 28, 2016, tornadoes raging in South Australia damaged the electricity transmission grid enough to plunge the entire state into darkness, with only Kangaroo Island offshore untouched. In the end, the outage is estimated to have cost the companies $360 million. The outage lasted from four hours to two days.

Blame after the blackout focused on South Australia’s reliance on renewable energy sources, highlighting the evidence that solar and wind lose their power when the sun is not shining and the wind does not blow.

Another less severe blackout in December 2016 led to a new round of blame.

In the space of six months, the founder and CEO of one of the world’s first entries into the electric vehicle market – Tesla – has stepped into the discussion of how to make Australia’s electricity transmission du South more reliable.

In 2021, Yadlamalka Energy embarked on a project in South Australia combining a VRFB system with a solar farm and a DC (direct current) inverter.

Globally, energy storage from renewable energy sources is in its infancy. But the status quo will undoubtedly change as these storage systems solve the problem that plagues wind and solar power – intermittent generation.

The Tesla Powerpack system used lithium-ion batteries, but as is the case with batteries to power electric vehicles (EVs), alternative technologies are emerging, chief among which are “flow” batteries, the most important of this group being fueled with vanadium in the VRFB – vanadium redox flow batteries.

WattJoule is a Massachusetts-based engineering services company that supports customers interested in the long-term adoption of VRFB storage systems.

A report from a marketing and business intelligence firm IdTechEx suggests that the integrality of redox flow batteries could overtake li ion storage batteries by 2031. Redox flow batteries differ in their chemical composition from vanadium-based batteries, to zinc bromide solutions, to iron- chromium, bromine polysulfide, hydrogen bromide and others. There is a second vanadium solution – vanadium/polyhalide. Vanadium-based formulations are the current leader in redox flow battery technology. 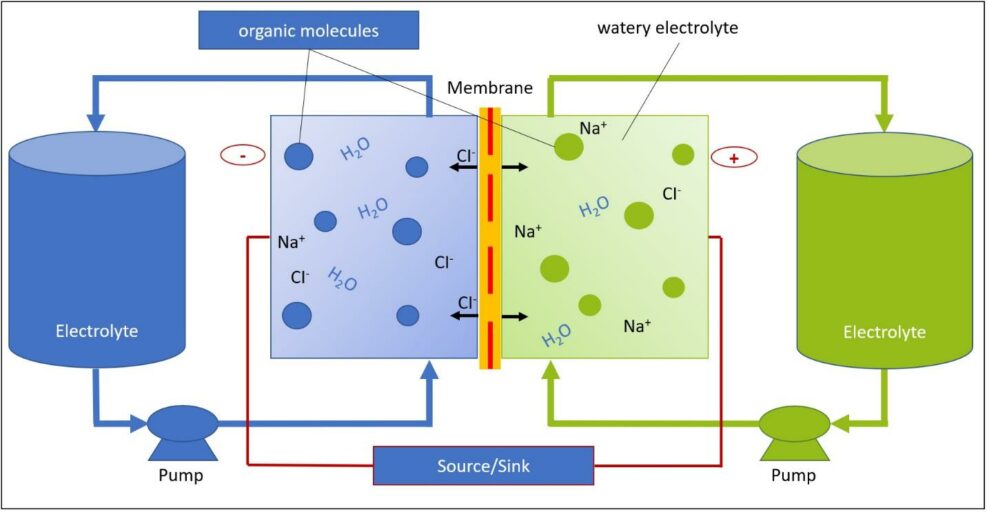 The external tank system allows VRFBs to be easily scaled up or down by changing the size of the tank. Two other key benefits are durability and long-term cost. Initially, a VRFB costs more to produce, but their lower operating costs and longer lifespan – 20 years or more – make them more cost effective. They are also safer, free from the fire hazard associated with li-ion batteries.

In addition, vanadium, like cobalt, is most commonly mined from magnetite ore bodies containing vanadium and titanium. The use of vanadium is also bolstered by its environmentally friendly supply from mine tailings as well as spent oil wells and storage depots.

VRFB was developed here in Australia in the 1980s and there are a host of mining companies large and small that are actively pursuing the commercialization of vanadium or have the potential to do so from what they extract.

For example, the largest graphite miner on the ASX – Syrah Resources (SYR) – has significant vanadium reserves at its Balama graphite mine in Mozambique, as does ASX iron ore miners from their operating assets.

The following table lists relevant metrics for three ASX-listed miners with market caps above $100 million and vanadium production as a key target.

Neometals describes itself as an “emerging and sustainable producer of battery metals”. The company has three business segments”

The company has a joint venture (JV) – “Primobius GmbH” – in place with the German multi-metal manufacturer SMS group for the construction of a lithium-ion battery recycling demonstration plant in Germany. Once the plant is complete, the joint venture partners will assess commercial feasibility and market assessment before making the decision to move into commercial production.

Neometals has a collaboration agreement with an Australian mining development company Critical Minerals assess the feasibility of constructing a recycling facility to recover vanadium from steel production. Critical minerals has entered into a ten-year agreement with the Swedish steelmaker SSAB for access to approximately two million tonnes of steel production waste from three operating plants containing vanadium.

A publication on July 7 of a feasibility study at neometal The Vanadium Recovery Project estimated that the project could produce approximately nineteen million pounds of vanadium per year at a cost of $4.38 per pound.

Neometals is the sole owner of the Barrambie Titanium and Vanadium project in Western Australia. The project is in the exploration and development phase and could become another JV, this one with the Chinese company Institute of Multipurpose Utilization of Mineral Resources Chinese Academy of Geological Sciences (IMUMR.).

On April 6, the company released the results of a bankable feasibility study, confirming that the project has the potential to become a major producer of globally significant vanadium, focusing on vanadium as an essential mineral for steel and energy storage sectors. The project has a lifespan of twenty-five years with the strategic separation of mining and processing operations allowing easy access to necessary infrastructure in the region.

The company has three other assets – vanadium/PGE/nickel/copper deposits, lithium/tantalum deposits and uranium/vanadium deposits – two of which are under development and one available for joint venture or sale.

Australian vanadium has a subsidiary – VSUN Energy – which offers VRFBs for large-scale energy storage applications. The project including a processing plant in addition to the mining site, the addition of VSUN to receive battery-ready vanadium, Australian Vanadium is fully vertically integrated.

May 31, 2022 VSUN signed a memorandum of understanding with North Harbor Clean Energy (NHCE) to collaborate in the development of renewable energy storage projects.

NHCE is a private energy storage company with smaller scale pumped hydro and VRFB projects. The company has a Joint Collaborative Activities Agreement with the University of New South Wales to further research and commercialize VRFBs. UNSW is the birthplace of FVFRB technology.

TNG Limited does not share the admirable historical performance in shareholder return of the other two companies. Prior to the surge in investor enthusiasm for battery-related minerals in 2021, investing in vanadium was driven by the outlook for steel production. GNT did not benefit from the rise in the battery mineral inventory market in 2021 as the outlook for large-scale energy storage facilities took hold. On the ASX website, here is a chart of price movements for the three companies. 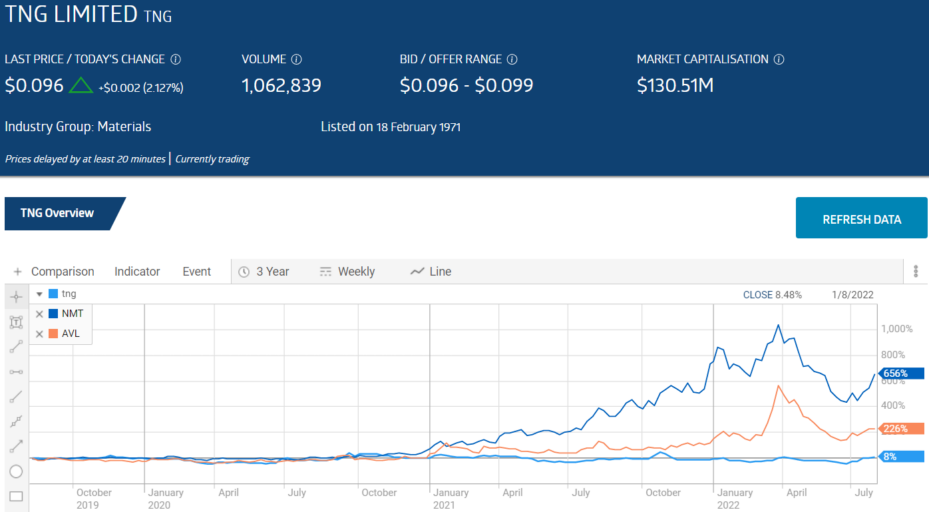 Mining licenses and most regulatory approvals are in place and GNT has an engineering and construction company – Clough Group — the spearhead for carrying out the project. The company also has a subsidiary and a JV partner working on the development of other green energy projects, including green hydrogen. The JV partnership with AGV Energy is developing a green hydrogen production facility – the HySustain Darwin project also in the Northern Territory.